I’ve now fully embraced that summer is over. I have welcomed fall with open arms and an open heart.

But, I didn’t know that I’d have to welcome winter at the same time.

Weather in the Seattle area has been unpredictable recently. Two weekends ago, temperatures suddenly dropped to the 40s — yes, I’m using Fahrenheit — and I was bundled to the nines. And then last weekend it was in the 60s and I ended up profusely sweating while standing with the sun beaming down on me at a soccer game I was watching.

This week the temperatures have dropped to the 30s at night and have still remained low in the mornings that I have had to scrape frost off my car windows for the first time this season!

It was no surprise, however, that we were greeted by white-flecked trails with nearby snow banks on a hike Sunday in the Snoqualmie area — about an hour outside Seattle.

The difference between the trail head and our destination, Kendall Katwalk, which was six miles up, looked strikingly different.

For one, about a mile into the hike, I had to shed layers because I was getting so warm. I didn’t even need a jacket and even rolled up the sleeves of my long-sleeve shirt. We could clearly see the dirt trail beneath our feet and the trees surrounding us were covered in green moss. 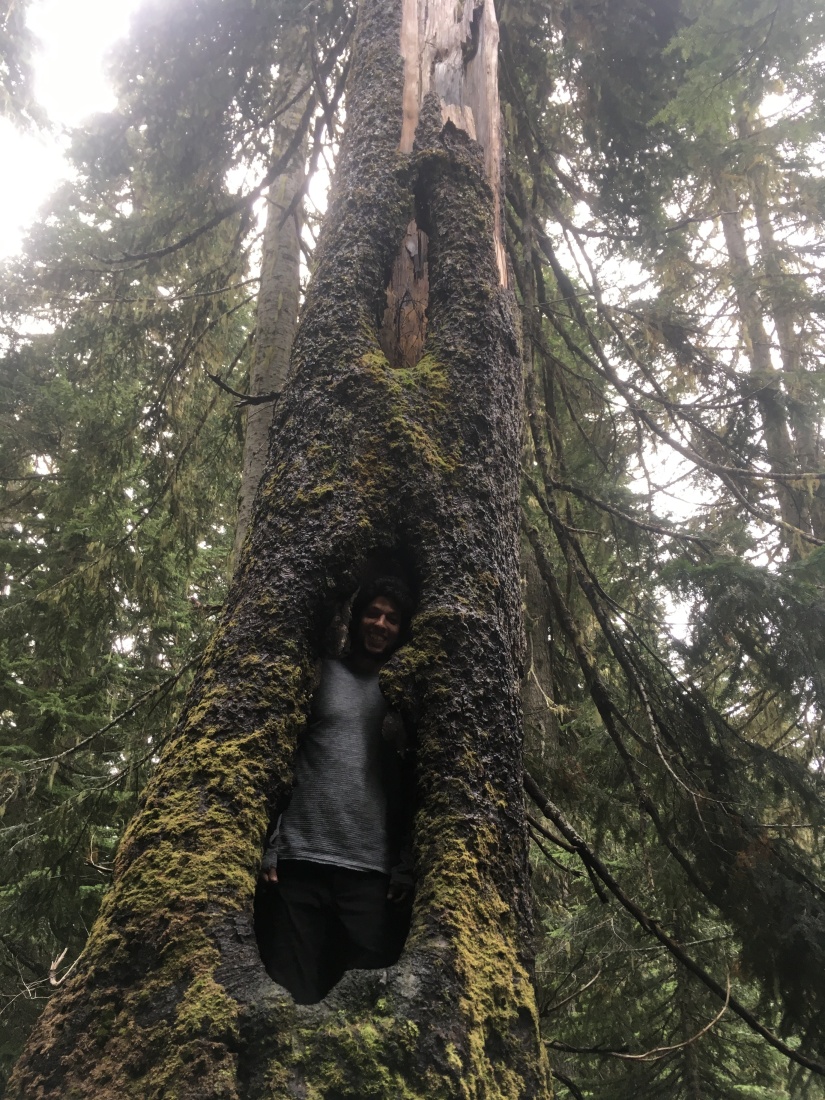 About 4.5 miles in, it was a change of scenery. We all needed to seriously layer up. I put on my windbreaker (which is thin) and my Gortex rain coat. I also put on gloves and a fleece headband to cover my ears. The wind was really blowing now that we were out of the tree line and out in the open.

Now boulders surrounded us and the chirps of pikas echoed for a bit. The sun was trying to peek out from behind some clouds. 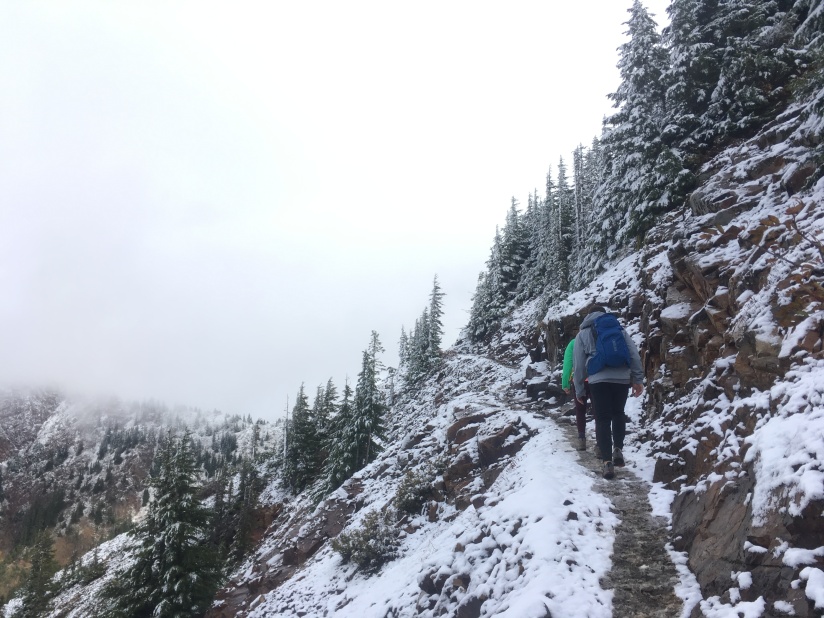 Soon, we were welcomed by snow-covered trails. Since most of the snowfall was from the previous weekend when the temperatures had dropped, the trail conditions were pretty good because a lot had melted. (The last mile or two to the katwalk had more snow on the trail but it really wasn’t an issue to navigate with regular hiking boots).

It was all beautiful.

The snow-capped mountain ranges. The trees that were dusted white. My nose was cold and I was getting the sniffles, but it didn’t bother me.

When we got to the actual katwalk part of the trail, it felt like we were in another world. There was a huge wall to our left and the “unknown” to our right because of all of the fog. 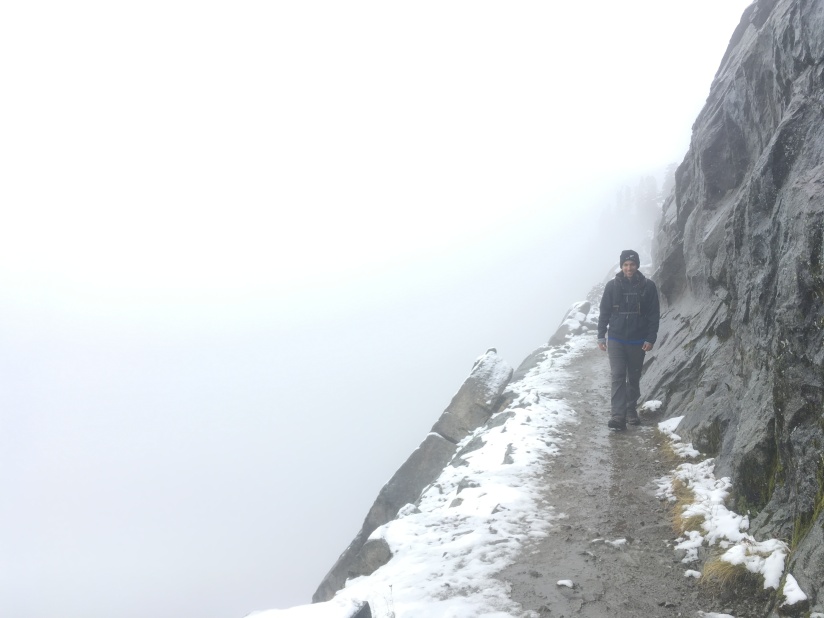 This trail is part of the PCT — Pacific Crest Trail — so if you so desire, you can continue on. We ate our lunch as quickly as we could and turned back around to head back to the car. 12 miles of hiking was good enough for us! We did see quite a few backpackers who were coming up when we were headed down. It’s pretty easy to tell who was out “on the PCT” and who was out just for a day hike like we were.

We took off our jackets, again. I was beginning to work up a sweat again.

We went straight from fall to winter and back to fall once we returned to our car. It was a fun day hike with friends, and Bryce was just happy that we didn’t do this hike in the summer because the trail would have been packed.

I’ll embrace fall, but I can also get on board to a winter wonderland — as long as snow doesn’t hit the city. We all know very well that Seattleites cannot drive in any amount of snow. 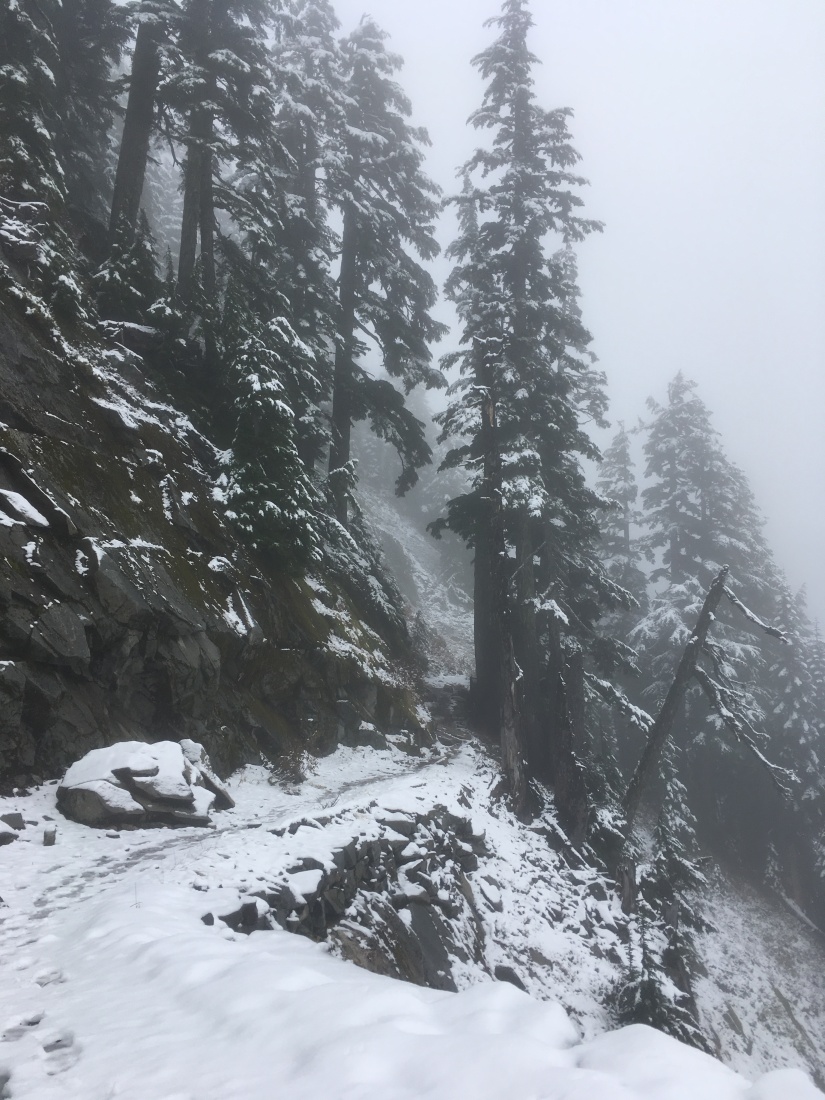 Maybe. But, after Halloween, it’s all fair game — in my book!