I couldn’t figure out why my husband’s phone was telling us we were 15 minutes away from the visitor center. When we had entered the national park, we thought we’d be at our destination in a mere five to 10 minutes.

“Are you sure you inputted the location correctly?” I asked him as he continued driving north.

The Denali Visitor Center would be closing at 5 pm. It was around 4:30.

Once we approached the “Healy” sign, Bryce immediately knew we had long past the visitor center. He pulled into a small gravel parking lot so that we could turn around. Healy is a very small town. Or, maybe not even officially categorized as a town, but a tiny cluster of motels and maybe a diner or two. I’m not sure, but the point is, we shouldn’t have even been there.

In the parking lot he looked at his phone and immediately told me we were 13 miles north of the visitor center! It would take us 20 minutes or so to get back to the area the visitor center was. And, now it made sense on what his phone was previously trying to tell me. (This visitor center was “behind” us as we continued driving further and further away from it …) I was just being technology-challenged at the time and couldn’t figure it out! Sigh …

We booked it out of that gravel lot as soon as we knew where we had to go.

“You’re getting your stamp!” Bryce exclaimed.

I like collecting the national park stamps. Well, I don’t exactly collect in the sense that some people do with those national park passports. I stamp a piece of scrap paper and then paste it into my journal later on. (I have a Traveler’s Notebook I use for, uh, travels).

When we finally rolled into the visitor center parking lot, my mother-in-law insisted that Bryce and I run in to ensure we could get in before it closed. She had Bryce stop the car in the middle of the lot so that she could then park the car.

We arrived through the doors with 8 minutes to spare! And, yes, I got my stamp. 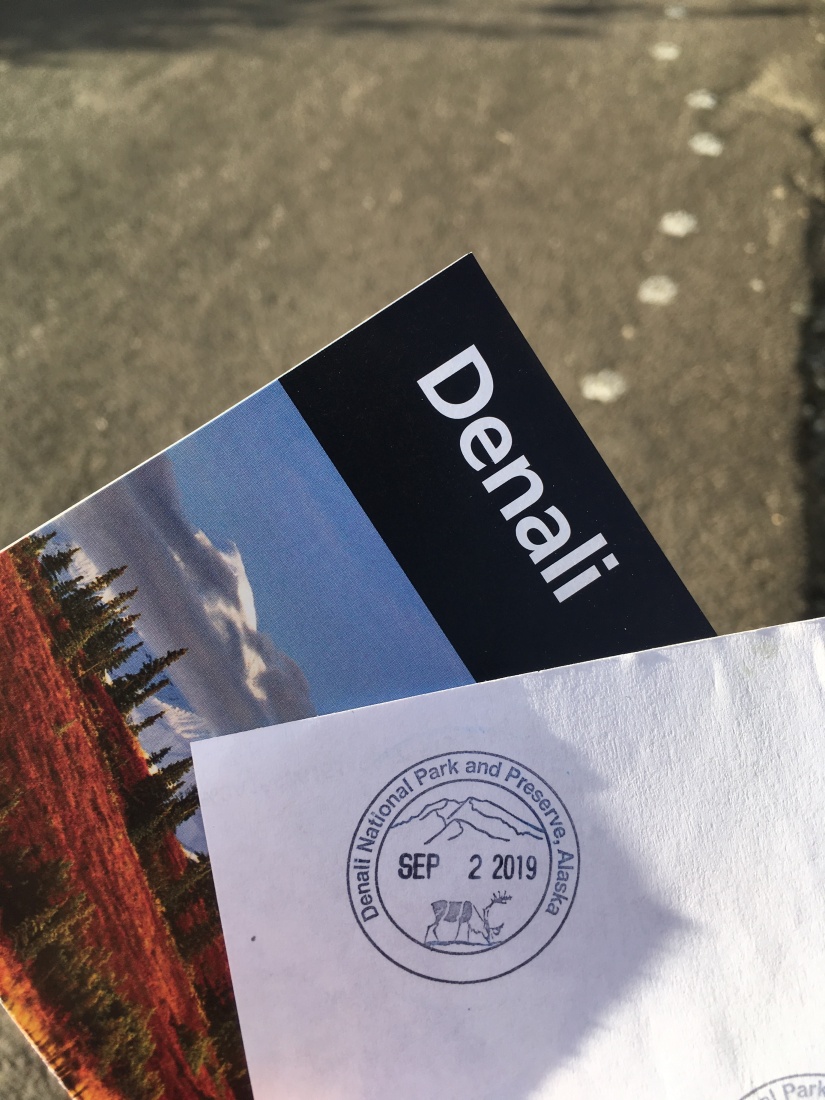 Why were we so pressed for time in the first place? Good question.

It’s because we hadn’t planned on going to Denali at all!

Bryce and I were visiting Alaska over Labor Day weekend to see family. We had hoped to go on a hike or two so earlier that day we did do a hike with my mother-in-law. After our rainy hike, we were about an hour south of Denali and decided to just go on a drive since the weather was starting to clear up. Was that even the sun trying to make an appearance through the clouds? I think so!

As we drove, someone decided we should just go all the way to Denali since we’d be so close anyway. It was probably Bryce. I had no geographic knowledge on how close or far we were from Denali. 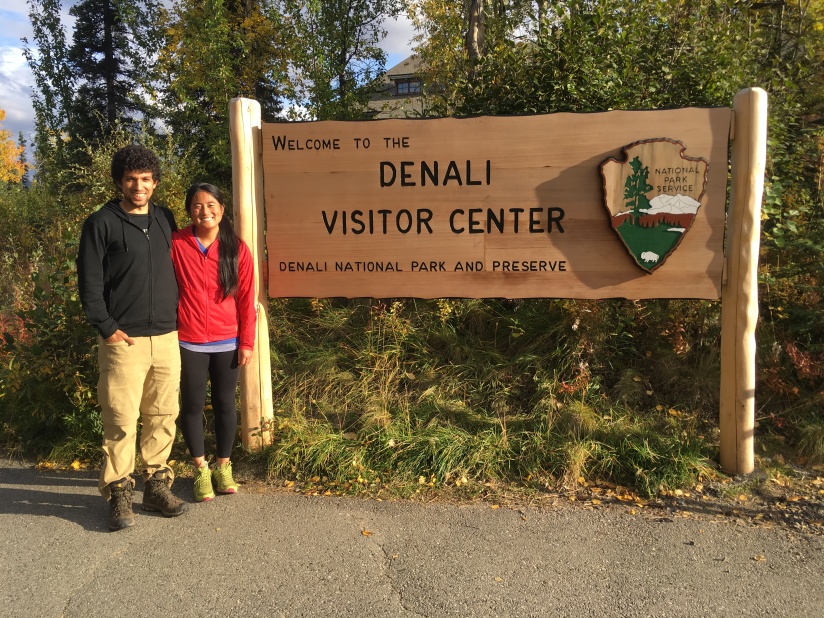 We didn’t actually see Denali, the majestic snow-capped mountain that is famous for being the highest peak in North America. I really didn’t mind because we had so many other fantastic views — and it’s pretty common to not get a glimpse of Denali when you are at the park. I was just excited to be there! 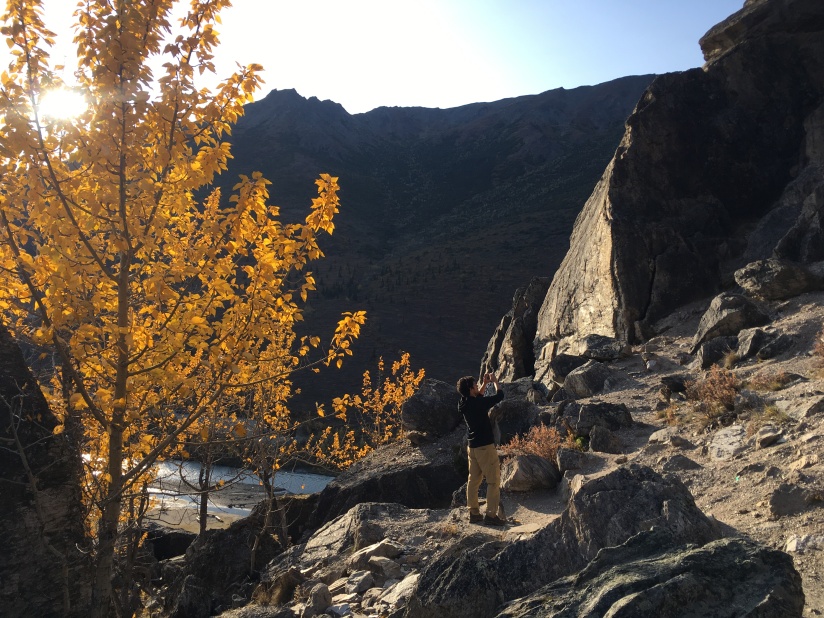 We saw moose while driving through the park. We did a short trek on the Savage Alpine Trail where we witnessed the start of fall colors. Honestly, driving through was just as pretty as walking on the trails. That late afternoon and early evening sun provided a perfect amount of light on the various mountain ranges and rivers we passed. 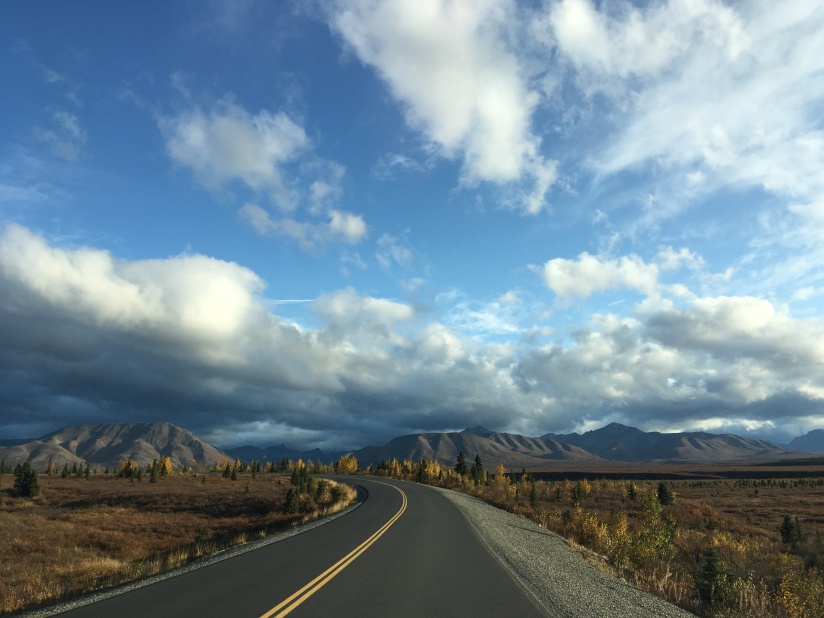 Around 8:30 we headed back towards the main road that was lined with hotels and restaurants. We grabbed a quick bite at a burger joint that was covered in old black and white photos of celebrities with their pet dogs. It was fun guessing who was who while we waiting for our black bean burgers and reindeer dog (for Bryce).

By the time we were done eating and about to hit the road home, it was getting dark. The rain really started pouring on the drive home, and lasted the entire four-hour drive back. There were a few times when a big semi-truck passed us and made me feel a bit nervous, because of how heavy the rain was coming down. When we arrived back at my mother-in-law’s house all groggy and exhausted, it was past midnight.

The trek was definitely well worth it though. I got a taste of Denali and can’t wait until the next time I’m able to return on a planned trip for more extensive exploring.

Denali, I’ll be back.

Hi, I'm Kristin! I live in Seattle and when I'm not working or running, I'm planning my next adventure. I'm here to share my travel stories with you!

When in Roswell 👽👾🛸 [New post up, link in bio!]
Two weeks later and still finding sand in my (washed) socks and shoes. Worth it. Also, based on the last video, which was my first sand sledding attempt, my technique improved a lot in one afternoon! 😆
White Sands National Park: largest gypsum dune field in the world, our country’s newest national park and the best place for sledding ✨☀️🌬[New blog post up on a fantastic day at White Sands and some one-of-a-kind experiences! Link in bio!]
Last weekend’s adventure involved going to three states within 72 hours. My Southwest road trip consisted of stops at two national parks, lots of driving, many tacos — and more! [New post up, link in bio!]
When Mary Poppins goes to Fushimi Inari Taisha ⛩☔️👜 [New post up, link in bio!]
Totoro’s day job is working the ticket counter at the Ghibli Museum.