So, I thought I’d chronicle my New Zealand travels in order of the places I visited, the things I did and the people — and animals! — I met, but it looks like I’m just going to write about whatever I am in the mood to write about.

Today, it is Milford Sound.

We visited Milford Sound about half-way or so through our trip. And, I’m not exaggerating when I say it is unlike anywhere I have ever been before. It is a fjord on the South Island of the country but it has so much more than what you would think of as a “typical fjord” with inlets of water and surrounding mountains.

Yes, it has all of that, but much more.

It was interesting to see all the different landscapes, and all that they had to offer.

We drove (OK, OK, my husband drove) us to Milford Sound. And, it may have taken us +4 hours one way but it was sure worth it.

We rode one of the nature cruises, which I’d highly recommend if you visit Milford Sound. The nature cruise is more than 2 hours while most of the “regular” cruises are about an hour. There is a guide on board who talks about the different nature formations and the sound, which made everything so much more interesting to look at!

It was heavily raining on our drive to the sound but the forecast showed that it would be sunny in the afternoon. And, I mean, it was pouring so much on the morning drive that sometimes it was even hard to see out the window with the wipers on full blast! So, we got really lucky later that day. Not only was it sunny and blue skies during our cruise, but because of all the rain in the morning, there were so many waterfalls “out.”

Milford Sound only has four official waterfalls but on days when there is a lot of rainfall, there can be more than you can count!

The cruise was super windy but Bryce and I stayed on the top outside deck of the boat the entire time to make sure we didn’t miss anything. Towards the end of the cruise, I had to use the restroom so I went down to the main deck  but as soon as I reached the bacthroom door, I heard our guide start to talk over the loudspeaker about some rocks we were passing by. I turned around and ran back up the stairs to the top deck. I wasn’t going to miss seeing these rocks! 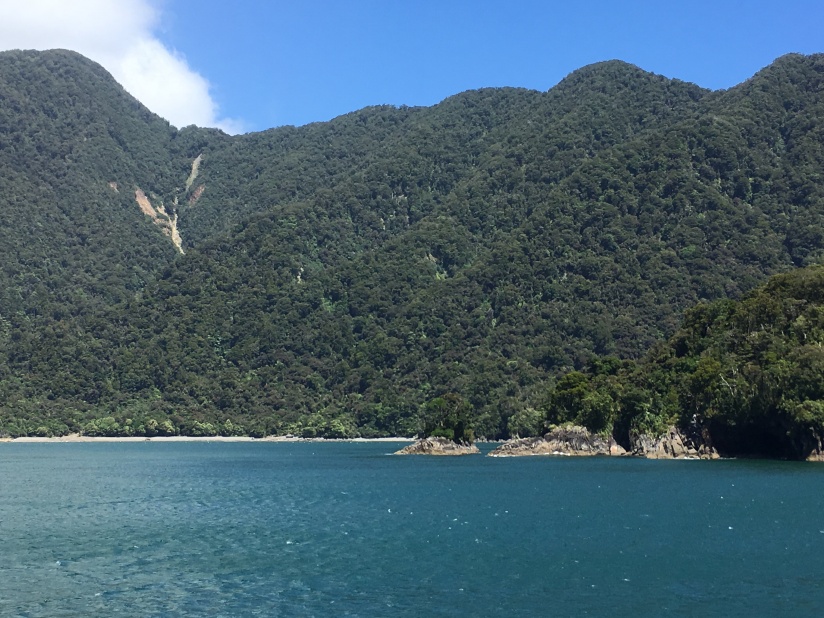 I’m not even going to tell you to go to Milford Sound if you’re visiting New Zealand because I trust that it’s already top of your list!