To be honest, I started writing this blog post a few days ago in a text file and for whatever reason, I forgot to save it and I was forced to restart my computer so I lost the draft completely. I don’t have the energy in me to rewrite everything word for word.

I will still tell you the stories, more or less.

Before going on my road trip in the Southwest last month, I was looking forward to eating good Mexican/Tex-Mex food. Once we were there, it turned out a bit differently than I imagined.

For our one and only night in Alamogordo, New Mexico, we went to a Mexican restaurant for dinner. With a half day of climbing up and sledding down sand dunes at White Sands National Park, Bryce and I were both pretty hungry.

I scoured the menu, avoiding items with the words “beef,” “pork,” or “chicken” in them as I don’t eat meat. I don’t tell people I am a vegetarian because I eat really crispy bacon — like, burnt to a crisp so it’s like a chip! — and I prefer soups made with beef or chicken broth. I guess I just don’t like the texture/consistency of meat.

Anyway, back to the menu at the restaurant in Alamogordo.

I found a dish that sounded good. It was like a torta and came with rice and beans. Bryce ordered posole, a popular Mexican soup.

When our orders arrived, they both liked great. (Bryce’s bowl of soup was huge!) I took a bite out of my torta and immediately knew something was not right. I had just eaten meat. I don’t know if it was shredded chicken or what exactly, but it was definitely meat. The torta was shaped like a pita pocket so I dug out all the meat with my fork and gave it to Bryce. It didn’t leave for much left inside. Oh, well.

I was surprised that my dish came with meat since nowhere on the menu did it say shredded anything would be included. I clearly wasn’t in Seattle anymore. Back home, I’m spoiled since it isn’t uncommon for menus to have an entire vegetarian page.

This meal was sadly a disappointment, but I was looking forward to Tex-Mex in Texas the next day!

We had a lot of restaurant options in El Paso, Texas. After scrolling on our phones at Yelp and Google reviews, we picked a Tex-Mex joint for dinner that was five minutes away from our hotel. (It turned out that this restaurant was a local chain because I saw two establishments at the El Paso Airport the next day! Oh, well).

It was a huge restaurant. I felt like I was in a medieval Olive Garden, but with Mexican flair. We were seated in the middle of a fairly large room. I took a look at the menu and saw that they actual had a vegetarian section! I decided on the vegetarian enchilada but then asked Bryce if I should ask the waiter if there is any meat in the dish, just to be safe.

His response: You’ll be fine.

I was more than fine. My huge enchilada plate arrived with a heaping side of rice and beans. The enchilda was so big that it came with a steak knife! I could barely finish all of my food. I also sampled some of Bryce’s hatch green chile. It was so good.

The restaurant was decked out in pink and red decorations for Valentine’s day. There was even a large stuffed red heart situated right next to our table that had arms spread wide as if it were going in for a hug. (I’d say stuffed animal but a heart isn’t an animal …) I left the red-cluttered restaurant almost in pain since I’m pretty sure I ate a few too many last bites to finish my enchilada. It was worth it. I was very full and very content.

We only spent one night in El Paso so the next morning’s lunch would be my final meal before heading back to Seattle. We hadn’t planned what we were going to do during the day that Monday and it turns out that your options are a bit limited. A lot of things, like museums, are closed on Mondays. It didn’t even matter that it was Martin Luther King Jr. Day!

After driving around aimlessly downtown for a bit, Bryce pulled the car over and we took to our phones to figure out what we’d do. We decided to drive down the Mission Trail to Socorro and check out the old churches. 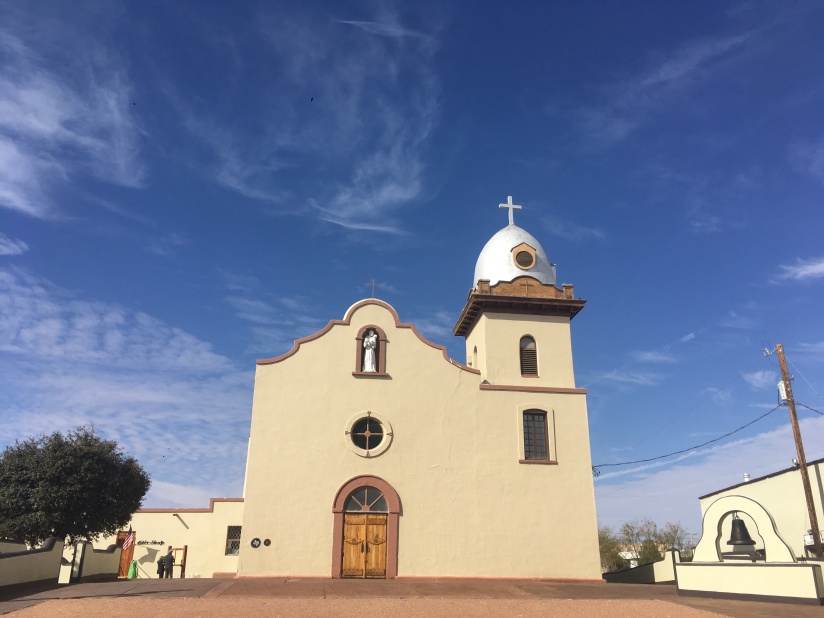 It really did have an “old town feel” as we drove further away from El Paso. We noticed numerous Mexican cafes and restaurants and made a comment that we wouldn’t have a problem finding a place to eat lunch on the way back.

I’m not sure how we chose the restaurant that we ended up at. Perhaps it was because of all the cars parked out front. Or, the large banner waving along the road that shouted they had tacos and burritos.

When we walked up to the door and I read the sign in all Spanish that said there was more parking in the back, I turned to Bryce and said, “This must be authentic Mexican food.”

Inside there were booths along the walls and tables in the center of the room. There was papel picado hung from the ceiling, so it was a festive, colorful atmosphere. One wall had a painted mural that read Michocan, proudly indicating the Mexican state the owners are from.

The menu was all in Spanish. I think this food would be as Mexican as we could get without physically being in Mexico.

I took Spanish in high school and almost majored in it in college. I could easily read that the menu was very meat heavy. I guess it would be two bean and cheese burritos for me. Bryce asked me if that would be enough food for me. (He knows me well enough to know that I tend to get cranky if I’m hungry).

When the waiter arrived, I almost ordered a third burrito but stayed with the two. 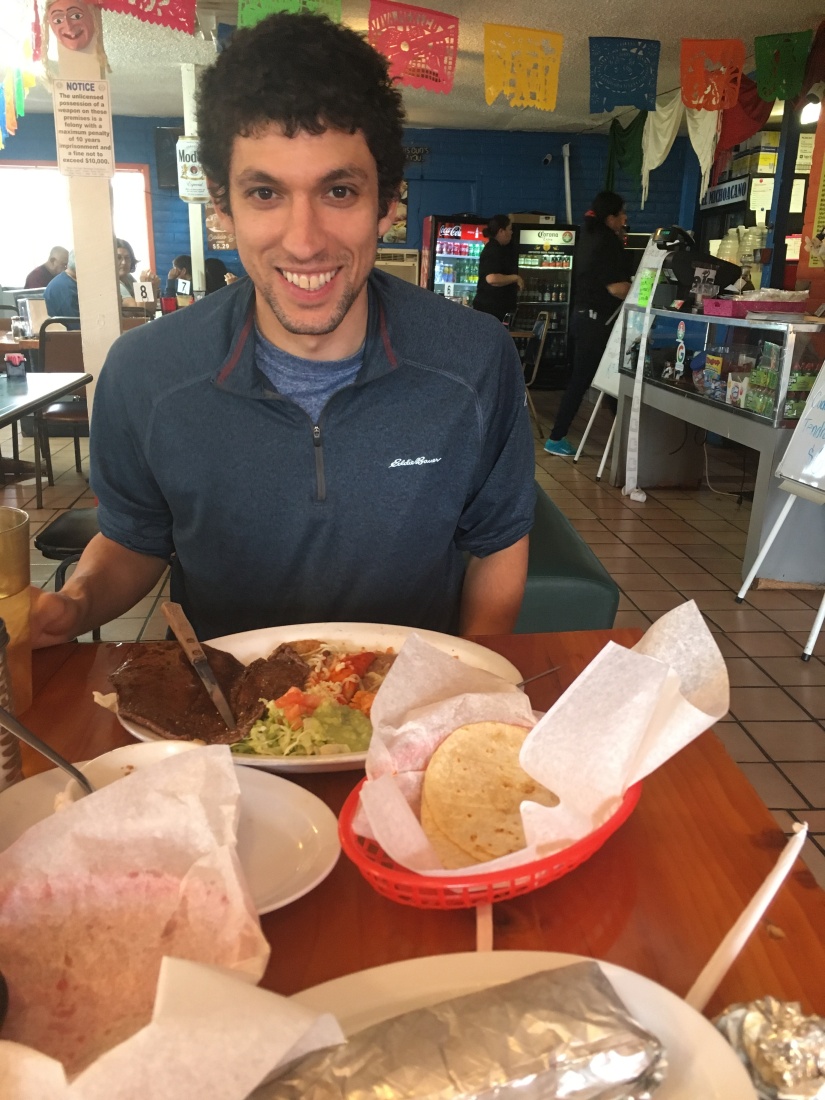 Bryce enjoyed a plate of meat and rice, oh, and of course some more hatch chiles!

Despite it being a weekday, the restaurant was pretty crowded. The one waiter kept apologizing for the wait, when really, it didn’t feel like we had to wait that long for our food. She was super friendly and nice and I’m so happy we happened upon this place.

Sometimes just dropping into a small, nondescript joint is exactly what you need to do while on vacation. It’ll probably be better than anything you’ll find on Yelp!