I was nervous sliding down that first sand dune. While I won’t knock something until I try it, I tend to be a scaredy-cat when I think I could get hurt. Example: It took me until I was 22 years old to ride a roller coaster at Disneyland. Turns out I love them. (I even ride the loop-de-loop one now!)

So, once I do something once and realize — from my own experience — that it is in fact safe, I’ll do it again and again.

The first sand dune I went down wasn’t even the steepest one we experienced. It was just the closest one to the parking lot at the trail head of the Alkali Flat Trail at White Sands National Park.

We decided to do the 5-mile hike because it’s the longest marked one at White Sands. While well-marked, they caution visitors that it takes 3 hours to complete the full loop. In our case, it took a bit longer because we made stops along the way for sledding — and then climbing up the same sand dune a second, or even third time, to slide back down again when we found a really good slope.

How do I even describe White Sands?

It is literally like no place else on earth.

The park is 275 square miles of gypsum sand. Gypsum is a soft sulfate mineral composed of calcium sulfate dihydrate. White Sands National Park is the largest gypsum dunefield in the world! (Hence the fact that there really is no where else like it on our planet!) Prior to visiting the park, I had no idea what gypsum even was! 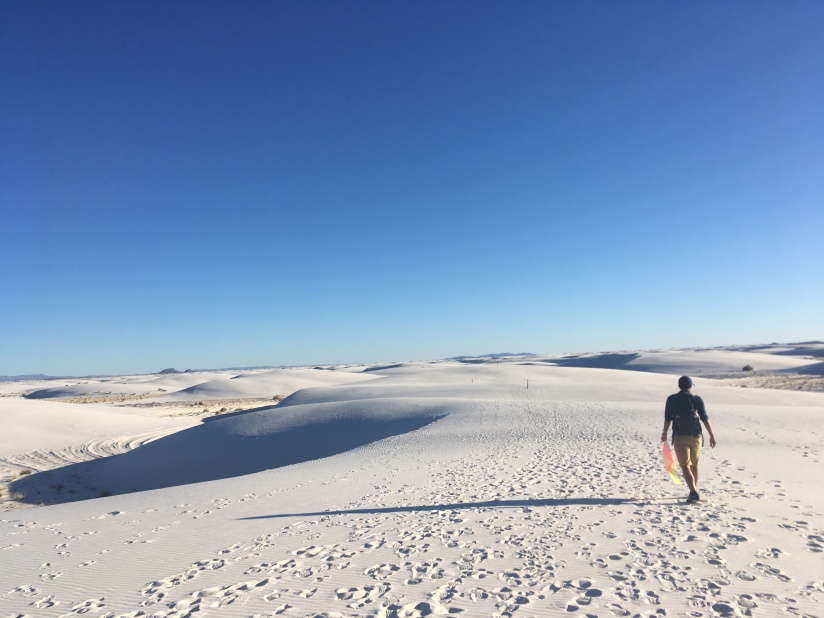 So, you are in the middle of nowhere, New Mexico with white gypsum sand as far as you can see. There are the San Andres Mountains off in the distance to the west and the blue skies above. From the wind, the sand dunes had wave-like formations. It really felt like we were on another planet. Like, some combination of the moon, without the dark atmosphere, or like a desert from one of the Star Wars movies — those are all on other planets, right?

Once I went down that first (lame) slope, and realized how fun sledding down sand dunes is, I was ready for more! That meant, starting our hike so that we could find more dunes!

I had debated at the car on whether or not to walk barefoot, or in my Birkenstock sandals, since I saw many others headed back to their cars who were barefoot. I decided to keep my running shoes on and was glad I did.

For one, five miles is a long time to walk barefoot — my sorry feet need all the support they can get! Two, some of the sand dunes were so steep that without footwear, I feel like you would have just sunk into the sand and it would have been even more difficult to make it to the top, than it already was! I was quickly working up a sweat not even a mile into our hike and was thankful I opted to wear a T-shirt rather than a long-sleeve shirt. 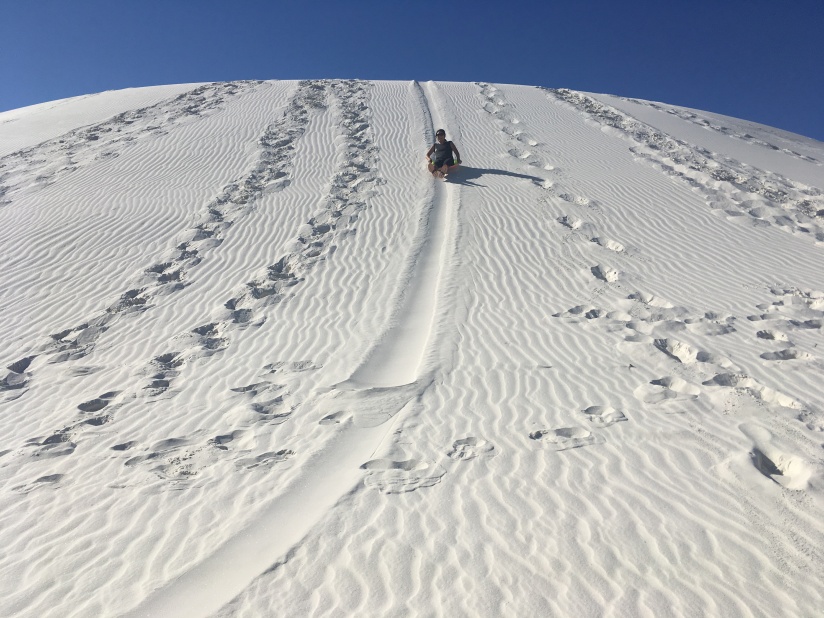 We definitely got more out of the sledding experience on the way back to the car because there were steeper slopes to go down. I may have gotten a ton of sand flown into my face and down my shirt on one exceptionally steep sand dune. My sled came to a halt when I ran over some hard-packed sand clumps and plants at the bottom. Despite the bumpy landing and getting sand everywhere, I climbed back up the dune so I could do a repeat sled. Trust me, it’s so much fun.

At White Sands, kids are sledding, adults are sledding. And, of course, a few dumb young adults are attempting to sled down while standing — this is discouraged behavior from the park rangers.

Like I said, White Sands is like nowhere I’ve ever been because it’s really a one-of-a-kind place. The landscape is fascinating. It looks incredible. We lucked out with great weather: high 60s with blue skies and sun.

It was also very, very quiet.

Even though it was a Saturday — the Saturday of Martin Luther King weekend — I was surprised by how few visitors there were at the park. The parking lot at the start of the hike was not even half full. Needless to say, we would once in a while pass other hikers or see a person off in the distance sledding down a sand dune, but most of the time we were completely alone with no one in sight.

Bryce and I were just approaching the “turn around” point of the hike where we would be turning to start heading back to the trail head. He stopped and commented on how quiet it was.

I opened my eyes after about 15 seconds of listening. I was stunned. 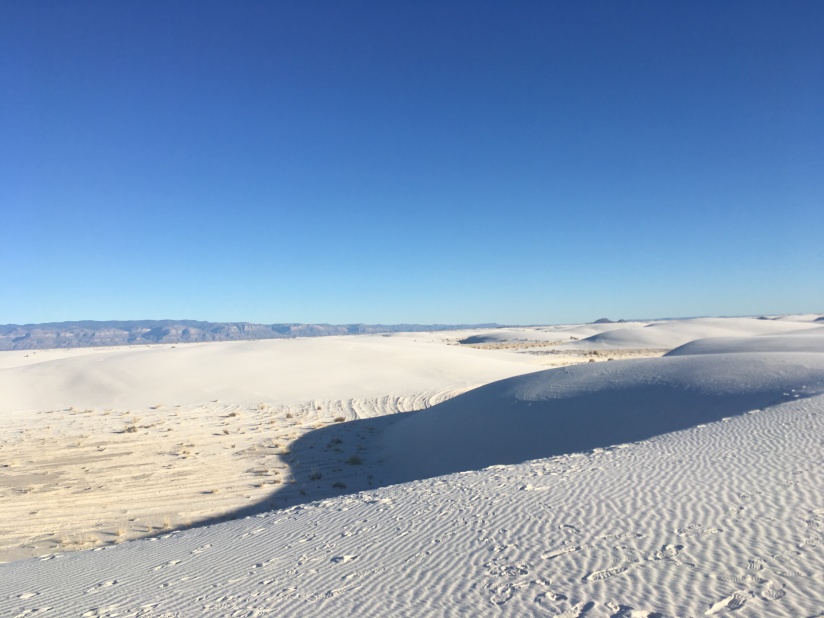 I honestly think it was the first time in my entire life — that’s 32 years — that I stood somewhere that was completely quiet. Or, if I have been some place else this quiet I guess I never realized it because I was probably talking!

It may seem crazy to you, but I guess it really isn’t to me. I was born and raised in a city (Seattle). I have always lived in cities. Even a quiet neighborhood in the city, you still hear a neighbor’s dog barking from time to time or a car driving by. And, unlike hiking in the desert, when I hike in the mountains near the Seattle-area, you always hear something whether it’s the sound of rain showers, a chickadee chirping or leaves bustling in the wind.

I closed my eyes a second time to try to hear something. Again, it was just silence. I opened my eyes back up and told Bryce that I felt a bit creeped out by how quiet it was in that moment.

“Let’s keep walking!” I exclaimed. He probably chuckled back at the city girl.

Colder than you think

With about two miles left to get back to the car, I told Bryce that I planned to ditch my shoes once I could make out the parking lot. I was getting tired of dumping sand out of my shoes every mile or so. (It may seem silly to do that in the middle of the hike and not wait until the end, but I was getting so much sand in my shoes — especially after climbing up the dunes — that it was a necessity to do!)

We approached a very good-looking dune. Yes, by this point of the hike, we had become experts at spotting good sand dunes to slide down! We only bought one sled so Bryce offered that I go “take a spin.” I obliged. It was the steepest and longest dune of the day. I tried to run back up it so I could go again. And, Bryce also went down it twice.

Before the second time I sled down this dune, I removed my shoes and my socks. This is because we could make out the trail head and parking lot, finally! The second time down was just as much fun as the first time. I picked up the sled and started making my way back up the hill.

With every step I took, there was such a cold sensation on the bottom of my feet that it kind of hurt. I tried running up the steep hill. A jolt went through my body and when I made it to the top, I threw the sled in Bryce’s direction and immediately sat down and grabbed both of my feet with my hands to warm them up.

This should have been my cue to just put my socks and shoes back on. But, I didn’t. After Bryce came back up the hill with the sled, we continued on towards the car. Not even five minutes passed and I plopped to the ground to put my footwear back on.

I guess I was surprised because temperature-wise, it didn’t feel cold yet. I was still walking about in my T-shirt and my arms did not feel cold. However, because gypsum is clear, it does not absorb much heat from the sun, like “regular” sand does. The sand stays cool year-round and I think because sunset was approaching, it probably felt colder than several hours earlier when I witnessed other people walking barefoot like it was no big deal.

I learned so much on this day! 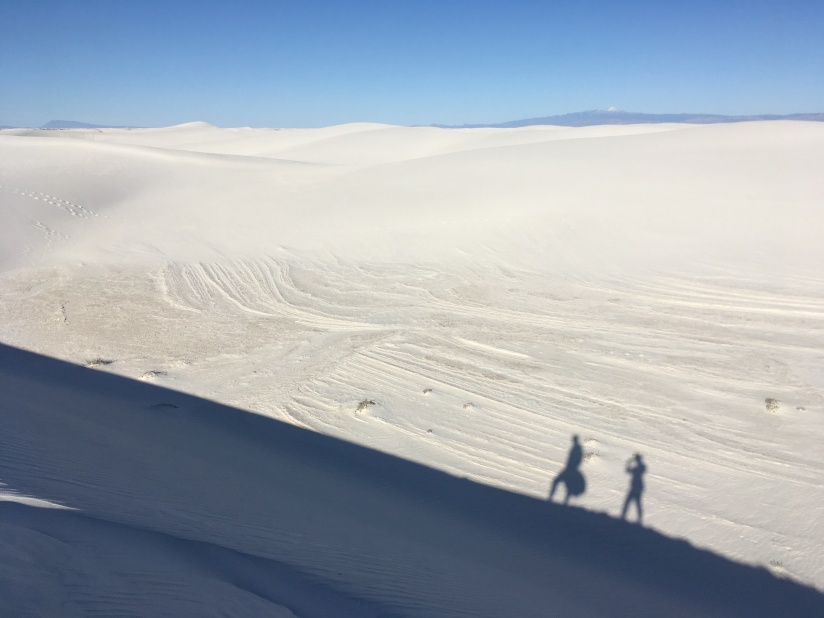 White Sands is amazing. It’s also the newest national park! And, the least crowded national park I have been to. (Previously, it was a national monument until last month).

Hiking, sledding and cool landscapes made for one incredible day.

4 thoughts on “Hiking, sledding and just in awe at White Sands”

Sun and cold and trees and a lake.
My phone reminded me that 4 years ago I enjoyed this real fruit ice cream at a roadside stand in New Zealand. It was berry delicious. As you can see, I only keep the really important photos saved on my device.
Last weekend.
First snowshoe of the season ❄️🥾
Sunny beach day after days and days of rain.
Sand Dunes Day. #tbt