Daylight savings time always messes with my body. I hate losing an hour of sleep. But, I guess the payoff is that you have an hour of extra daylight at the end of the day.

This past Sunday, on Daylight Savings Day, Bryce and I decided to make full use of the wonderful sunny weather we were having in Seattle — by leaving Seattle.

We took a ferry ride to Kingston.

Because, why wouldn’t you want to cruise on Puget Sound with majestic views of the Olympic Mountains, Mt. Rainier and Mt. Baker, all from one boat ride?

We parked our car in Edmonds, which is just north of Seattle, and walked on the ferry as passengers because 1) paying for the car on the ferry is expensive and 2) our only plan was to just walk around Kingston. We caught the 1:30 ferry and had a very nice ride.

The smell of the salt water. The sun shining. Yes, it was cold out on the deck of the boat, but it was worth all the views. It’s funny to look back and think that there was one dark point of my life where I didn’t like ferry rides. (It’s because it meant the end of my weekends because I used to work on the peninsula alway from my friends and family).

Now ferry rides are much different!

At one point during our ride to Kingston, I ran inside to use the restroom and when I returned, Bryce was still taking photos of Mt. Rainier. When I jokingly asked if he was done taking photos of the mountain, he seriously replied that he had shot more than 100 photos just of Rainier!

When we arrived at Kingston, we walked along the pier and by the shops in town. Bryce had researched a nearby park with trails that we had planned to explore. As we were walking up a pretty steep hill, that had no sidewalk nor shoulder, I noticed how every time a car passed by, the driver was would slow down and move to the other side of the road.

“That’s how you know we’re in the ‘country,'” I said. “In the city, people would still be zooming by us!”

Bryce may have rolled his eyes at this comment.

There were clear signs on the road that marked an outlet to the trail. We suddenly found ourselves in a secluded little forest of tall trees and a fern grove. The sunlight that came through the trees was magical. It was as if the light was shining down just to play with the mossy tree trunks and luscious ferns. Beyond the trees, you could see the blue of Puget Sound. It was quiet. It was peaceful. No one else was around.

It’s not a coincidence that it was quiet. This park is called “Quiet Place Park.”

On our way out when we reached the main road again, a couple had just parked and the two were getting out of their car.

“Did you save any photos for us?” the gentleman said to Bryce who was still holding his camera.

I thought this would just be a quick banter among strangers but it actually turned into a nice conversation.

The couple started telling us more about the park and how it’s a community effort to keep the trails maintained and the park clean. “If not, the DNR will take the land back,” the man explained. His wife chimed in that the park was originally started by a local woman in memory of her daughter who was “brutally murdered.” 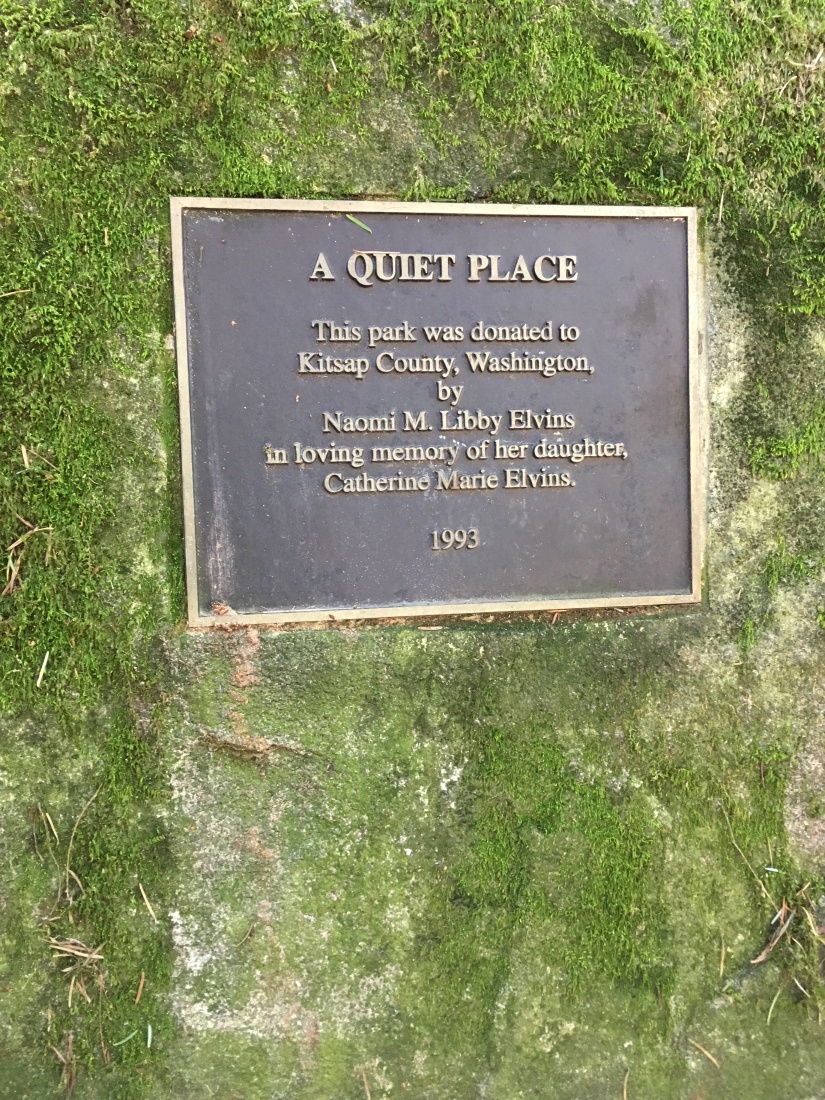 We had seen a plaque that indicated the park was dedicated in memory of a daughter, Catherine, but there were no other details on the date or how old she was. What a sad story, but such a beautiful place to keep one’s daughter’s spirits alive.

Every time there would be a pause in the conversation as the four of us stood around their car, I thought the conversation was over. Don’t get me wrong! It was an enjoyable conversation but the husband was starting to hover away from the trail so I kept thinking he was done talking to us!

But, one of them would ask us another question and the conversation continued.

“Where are you two from?”

We quickly found out that this older couple used to live in Seattle but they moved to the peninsula 15 years ago. “It’s not the same city, so many changes. So we decided to move,” the husband said.

We also quickly learned that they used to live and own a business just a few blocks away from where we currently live! What a small world.

And, that the wife used to be a nationally-ranked marathoner and had competed on four national teams (for various sports) in the past. Now she’s 70 but is still fit and cares for her 102-year-old father! The genes are clearly good in that family.

It was kind of funny how many similarities there were between me and this woman.

She went to the University of Washington. I went to the University of Washington. (We found out she’s been to New Zealand) and I’ve been to New Zealand. She’s from Seattle, I’m from Seattle. She’s a runner, I’m a runner. Although, when she used to run marathons, she was saying she would do 12 milers every day. (My body cannot take on that kind of mileage. Even when I was injury-free, I wouldn’t be able to do that).

The conversations eventually came to a natural end. We said good-bye and each wished each other well.

“Don’t give away this secret place!” the man said as Bryce and I headed down the road.

“We’ll keep it a quiet place!” I replied.

1 thought on “A quiet, friendly, place”

My phone reminded me that 4 years ago I enjoyed this real fruit ice cream at a roadside stand in New Zealand. It was berry delicious. As you can see, I only keep the really important photos saved on my device.
Last weekend.
First snowshoe of the season ❄️🥾
Sunny beach day after days and days of rain.
Sand Dunes Day. #tbt
Happy New Year.