As you know, and can infer from the name of this blog, I love otters.

I have another favorite animal after my New Zealand trip: Valais Blacknose sheep!

There are 5.6 sheep per person in New Zealand. Yes, more sheep than humans! But, Valais Blacknose are different from the “typical” New Zealand sheep. They aren’t the white ones. They are not originally from New Zealand. They are Swiss.

I learned about these Valais Blacknose sheep in New Zealand from a coworker who sent me a link about them — apparently they were being hyped up on Reddit. At first Bryce and I didn’t think it would work to visit them because the farm location didn’t seem the most convenient with our plans. And you couldn’t just pop by and visit, you needed to stay at the farm’s Airbnb. Going into the trip, we decided we would see these cute sheep in their native Switzerland … some day.

A change of plans

We were at dinner in Hawaii with family and they were asking us what our big plans for our New Zealand honeymoon were. (Coming from Seattle, we first stopped on Oahu to see my aunt, uncle and cousin before heading to New Zealand). We told them how we were registered to do a trail race at one of the national parks. We told them we’d be doing a lot of driving since we’d be exploring both the North and South Island.

And, then for some reason, I mentioned something we weren’t doing: visiting the cutest sheep in the world.

“The cutest sheep in the world? What are they called?” my little cousin asked. (By little, I am referring to a high schooler, but, she is the littlest in our family!)

She quickly pulled out her phone and immediately started “awwwwwww”-ing.

She asked why we weren’t able to see the sheep and we explained why. Then we all moved on to another topic of conversation.

After dinner when we were back at the house, Bryce said that he needed to check something online before we went to sleep. I asked him what was wrong, because he seemed concerned.

“I think we can make it work,” he said and showed me his computer screen.

It was the Airbnb listing for the Valais Blacknose sheep farm.

“But there is a two-night minimum. We don’t want to get stuck there with nothing else to do, right?” I replied.

He had done some more research and we learned that Abel Tasman National Park was only a 40-minute drive away. This was a beach and park with trails we wanted to hike. We’d have to endure a long drive from the south end of the South Island to this northern part of the island where the farm was. But, it would work! Usually a notorious planner, I I was glad that this time we hadn’t planned every single detail of our trip way in advance.

We would visit the cutest sheep in the world after all. I was elated and we hadn’t even met them yet!

Since we arrived at the farm late at night, we didn’t see the sheep right away. When we woke up the next morning, there were several young ones in the field next to our town house. And, an adult male sheep separated in a fenced off area in front of the house. 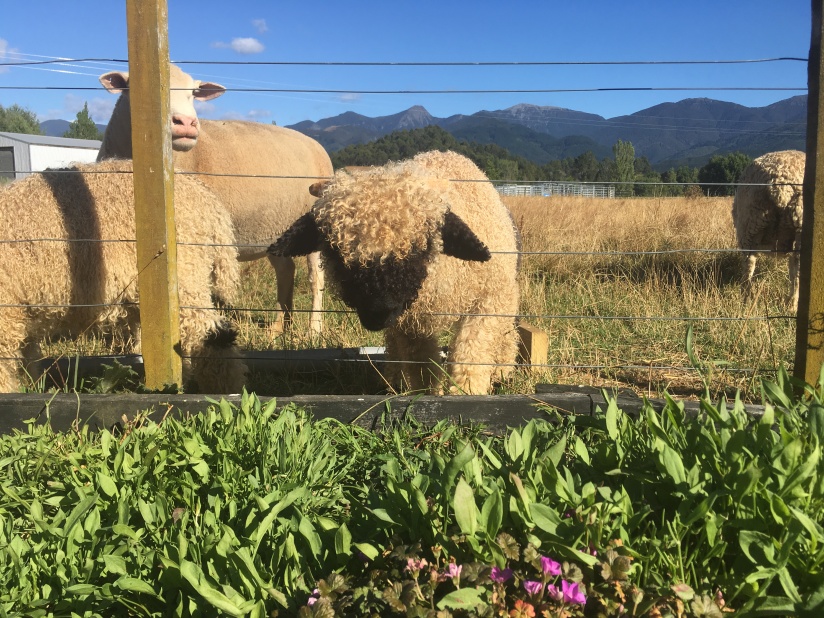 I walked right up to the fence to get as close as possible to the young sheep. They came right up and were poking their heads through the wired fence. They really were, very, very cute! One started munching on grass and flowers that were on the other side of the fence. Oh, and even their baaa-ing sounded cuter than a “regular” sheep!

We ate breakfast outside on the patio just so we could watch the sheep. The adolescent ones were adorable to observe. They were paired with a few non-Valais sheep (so, yes, “regular” sheep) and followed them as if they were their own mothers!

Our hosts, the farmers, had a farm that not only includes the Valais Blacknose sheep but also cows and chickens. They came by and we learned that they used to live in the city but recently fulfilled their dream of having a farm, with Valais Blacknose sheep! They also re-enforced my notion that farmers are some of the most hardest working people.

They took us around the farm and we helped them feed the sheep. The sheep definitely acted like puppies. They are curious and kind. You really only have to be careful of the adults, who have horns. You don’t want to accidentally get sideswiped by one when they mean to just play with you! (We left unharmed).

At one point, we hopped on their four by four so we could meet some of the adult sheep who were at the other end of the farm. (They had a very large farm!) Once we got close enough to them, they started following us, trailing the four by four, because they knew we had their breakfast. Let me just tell you that having sheep follow you might just be the funnest activity.

The Valais Blacknose sheep aren’t as soft as you may think. Their fur is a bit more matted so it isn’t super fuzzy or soft. None the less, petting them would put anyone in a good mood.

I’m so thankful that I learned about these sheep and that it worked out in our itinerary for us to visit them. Also, Valais Blacknose sheep are not used for food. That was one of the comments our host told us about having these sheep. She said they are like raising dogs.

When we return to New Zealand one day, we are definitely visiting our Valais Blacknose friends again.

2 thoughts on “Meeting the cutest sheep in the world”

Hi, I'm Kristin! I live in Seattle and when I'm not working or running, I'm planning my next adventure. I'm here to share my travel stories with you!

When in Roswell 👽👾🛸 [New post up, link in bio!]
Two weeks later and still finding sand in my (washed) socks and shoes. Worth it. Also, based on the last video, which was my first sand sledding attempt, my technique improved a lot in one afternoon! 😆
White Sands National Park: largest gypsum dune field in the world, our country’s newest national park and the best place for sledding ✨☀️🌬[New blog post up on a fantastic day at White Sands and some one-of-a-kind experiences! Link in bio!]
Last weekend’s adventure involved going to three states within 72 hours. My Southwest road trip consisted of stops at two national parks, lots of driving, many tacos — and more! [New post up, link in bio!]
When Mary Poppins goes to Fushimi Inari Taisha ⛩☔️👜 [New post up, link in bio!]
Totoro’s day job is working the ticket counter at the Ghibli Museum.